My opinion (I was already asked - I was the player Chewy censored the name and thank you for that Chew) was given before seeing the chat and I voted for no punishment (well, I suggested his crits to b

ivorak, very interesting what comes out when you put a spotlight on someone.....(i hope he has an explenation?) i want to make a more general clarification for other people that might work with me 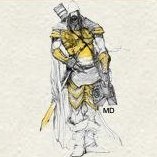 I cannot find the exact quote but I will try to remember correctly. Its taken from one of Jiddu Krishnamurti conversations. "If there is conflict there cannot be truth at the same time ..."